Witchaven & Maze Of Terror - Death For Our Rivals

With the split “Death For Our Rivals” Ragnarök presents a thrash metal-assault that was originally released in late 2017 by californian Nero One-records on tape only. As there has been a big demand to deliver this on CD, we are proud to announce the release of this masterpiece for the first time on compact disc. Witchaven (San Bernardino, California) and Maze Of Terror (Lima, Peru) are two of the most zealousy, agile and popular underground acts worldwide.

Witchaven is an outcome of the Californian thrash metal-scene. Coming into existence in 2006 they are now veterans to the scene and are able to look back on more than a handful quality releases including three full length-albums.

Maze Of Terror founded 2011 in Lima, Peru soon have been invading the world wide thrash metal scene with just very few releases, fulminating in the 2016-masterpiece “Ready To Kill”.

If you are a true thrasher you have to nail “Death For Our Rivals”. 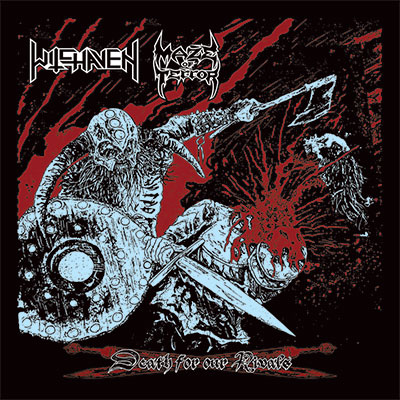 Reviews "Death For Our Rivals"