Skull Koraptor is a Thrash Metal band from Athens, Greece. They released their first EP "Dead Ahead" in May 2014 and have shared the stage the following years with bands like Skull Fist, Destroyer 666 and Tankard among others.

The band is dedicated to spread the new wave of old-school thrash metal and after lots of hard work they composed 9 new songs and entered the studio to record their first album. Now they have finally finished their full-length album titled “Chaos Station”, which will be released by german RAGNARÖK RECORDS in mid January! 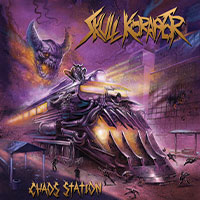