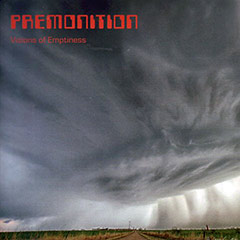 Premonition has been one of the leading forces in the nineties Texas techno thrash metal-scene. Together with techno-gods Watchtower, Arcane and few others they shred the stages in the Lone Star-state, released fantastic, original songs and had a great influence on countless followers. Unfortunately it never led to a deal, though there have been offers from worldwide operating labels. But their music is still hot and has frenetic fans all over the world until this day! So here is what the fans have craved for: A Premo-re-release on CD! The first three demos! TEXAS TECHNO THRASH revisited!

PREMONITION (from Arlington, Texas) recorded five demos (the last one still unreleased) while their 10 years-existence. The first three of these demos – „Premonition“ (1989), „Visions Of Emptiness“ (1992) and „Brutal Healing“ (1993) – with a complete of 14 songs you can find on this re-release on the new found label RAGNARÖK Records. All of them remastered to give them an even better sound-quality (though the original recordings had a great production) and let them sound like the result of a single recording-session.

If you are into thrash metal in general and the Texas scene in special this one’s for you. Intelligent and technical thrash metal with lots of aggressions...the missing link between Helstar, Watchtower, Gammcide, Rigor Mortis and late Pantera.

Tracklist:
1. Incarnation Of Death
2. Self Mutilation
3. So Heavenly Bound (No Earthly God)
4. Destined Fate (Divination)
5. Visions Of Emptiness
6. False Conviction
7. Execration
8. The Secrecy Among Us
9. Darkened Density
10. Multiples Of Identity
11. Unlike You
12. Of Spirit, Body And Mind
13. Brutal Healing
14. Induced Psychosis