Long gone are those times when the USA and Western Europe had been the hot spots for quality thrash metal. Other countries followed with original bands and left their mark upon the metal map. Just think of Sepultura.

For Central America there was building up a new hot spot for the last few years. There`s no doubt that the amount and quality of thrash metal bands from Costa Rica is outstanding. One of the leading forces there is definitely HÖWLER who have accepted to release their new album, which is by far their strongest work, via german Ragnarök Records.

The cover artwork for “No More Circus!” was done by Andrei Bouzikov who has also worked for Municipal Waste, Violator, Cannabis Corpse and Toxic Holocaust among others. It was mixed and mastered by David Sanchez from Havok.

The music itself is thrash metal with a brain. You can slightly hear influences from the glorious times of (thrash) metal. While the opener “Empire Of The Clowns” offers melodies which will give you a cool Iron Maiden-feeling, the deep emotional “Behind The Green Mask” comes crawling in with some Metal Church-vibes. You will find lots of 80s Bay Area influences like Megadeth, Metallica, Testament, but also Pantera for example.

All eight songs are on a high musical level. They are extremely original and will leave you with a feeling that the best metal from the 90ies has entered the Twentytwenties!

Lyrically this album represents a direct criticism of the politically abusive situations that the world faces right now, but that we dragged for many years.

Höwler - If You Want Peace, Prepare For War

Höwler - Behind The Green Mask 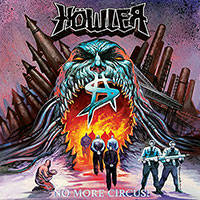