With this release a circle is closing for both – band & label – as the band‘s first effort (the highly praised debut "Episodes Of Insanity") should have been released as number 2 on Ragnarök Records way back in 2015.

But when we both got in touch the band had just inked a deal with the canadian label PRC Records and unfortunately a co-release was not able to come to fruition. PRC managed to bring the young hopefuls Costa Ricans to Northern America for around 18 shows. Now, seven years and three albums later Chemicide developed from the most hopeful thrash newcomer from Costa Rica to at least one of the best metal bands from whole Central America.

Anyone who has bought one of the predecessors of „Common Sense“ – and there have been quite a lot due to underground distribution and spreading word in the woldwide metal scene – has been flattened by the enormous quality of the quartett.

On album no. 4 the guys have gone on to mix their US-american influenced thrash metal with a little bit of punk & hardcore vibes which totally fit the social criticism in their lyrics.

Get your own idea by listening to „Common Sense“!!! 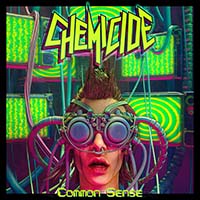