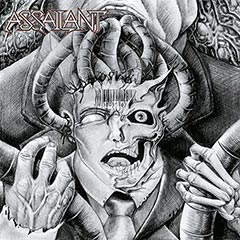 Assailant is one of the most promising thrash bands from Latin America. Hailing from Heredia in Costa Rica this is not the most common home for quality thrash metal, but this release speaks for itself as for the music scene in Costa Rica, too. Playing slighty technical, Bay Area-influenced thrash – though far from being called progressive -, the band performs some well structured thrash tunes with catchy riffs and aggressive vocals with a hint of Slayer.
The complete album gets some extra charme by not having a clean, polished production, but a perfectly fitting raw sound.
This release is a re-issue of the strictly limited 2012-demo (which had only 150 copies), remastered and with added bonus-material (2 live & 2 rehearsal-tunes) as well as a bigger booklet with more pics and informations.