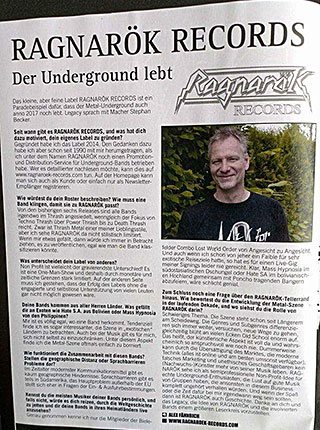 Being a die-hard free-time distributor and promoter in the late 80s and early 90s I was privileged to work with a vast array of talented metal underground-bands.

Well, ever since ‘them biblin‘days of yore’ the idea of releasing an album or maybe a 7 inch by a great band that had never been signed by a bigger label was just out there somewhere but bottom-line being a youngster and doing all this just for fun and out of sheer enthusiasm I didn’t really have the financial background to put this plan into reality.

As time went on my distribution and promo activities came to a halt, but I still stayed loyal to the metal scene by contributing reviews and interviews to German underground magazine Obliveon. Since I got tired of business rules and regulations and major label release policies and politics pretty soon, I went back to the roots – so to speak - by staying close to the real underground, thus mostly reviewing self – released albums and supporting those bands who were 100% hardcore D.I.Y.

Then, in the second decade of the new millennium the idea of doing a release on my own label came up once again. Right now, money wasn‘t the problem anymore. This time the restraints of a pretty tight time schedule turned out to be the biggest obstacle in the way of getting my own label off the ground.

As the planning proceeded I came to a point in early 2014 when I just had to ask myself the crucial question: which band would I like to go with for a label start? Coming to think about some of the bands I had worked with over the past 20 years, e.g. Allegiance, Arcane, Conception, Desultory, Dreemwich, Mooncalf, Severe Warning, Winters Bane and dozens of others, it became clear very soon that the first band I needed to ask if they were interested, would be Texas-Thrashers, Premonition.

Premonition was among the first two bands I ever worked with - the other band being Clevelands Severe Warning - and I‘ve always loved their music. In a nutshell: the outcome of these efforts was the CD „Visions Of Emptiness,“ which was released on my very own label, RAGNARÖK Records back in late 2014.

This CD included the first three fantastic demos by Premonition. We had them re-mastered and wrapped up in a digipack with great cover-artwork - a photo by Caryn Hill showing a super-cell / a rising tornado over the city of Throckmorton in Texas - plus a 24 page-booklet containing all lyrics, photos, flyers and some unearthed memorabilia from the band‘s archives. The CD received overwhelming reviews (9/10 in German Rock Hard plus Bonus Bomb of the Month, 5/5 (!!!) in the Polish Metal Hammer, 8/10 in Deaf Forever, 8/10 in Obliveon.de, 8/10 in streetclip.tv and 4,5/5 in Italian secretsofsteel.net). Subsequently the pressing of 500 CDs was nearly sold out within a couple of months.

This fact plus the fantastic feedback from loyal fans in Germany, Europe and from all over the world asking for more lead to one inevitable question: should I go on with the label or just call a one-shot thing? After some serious consideration about the pros and cons it became clear that the world was waiting for more releases from Ragnarök Records. So here we are!

Even though 2015 was a pretty rough year for the young label - I had to face the cold hard fact, “that not every musician who is interested in a release is also interested in co-operating and contributing to the job” - the spring of 2016 saw the release of two new CDs on Ragnarök Records: Assailant, a very talented Thrash band from Latin America and Pittsburgh‘s Crown The Lost. The latter already had two CD releases under their belt before they decided to go with Ragnarök Records.

Let me tell you this: as sales figure are going up and the first excellent reviews start popping in I’m extremely excited and curious about what’s coming next and where we‘ll all end up in, let’s say, another 25 years!!

If The Good Lord’s Willing and the Creeks Don’t Rise!